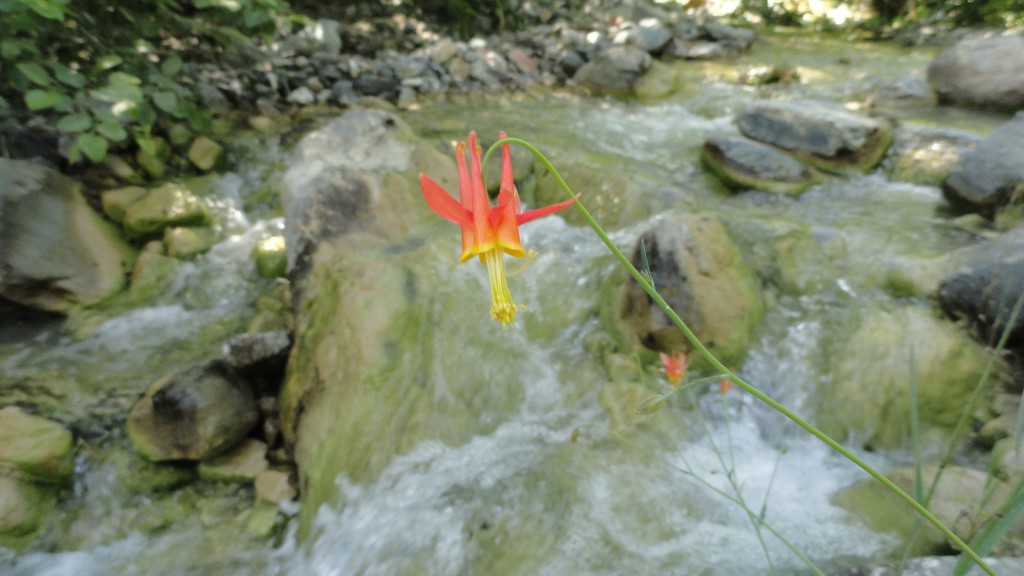 This columbine flower graces the tumbling stream of the Upper East Fork of the San Gabriel River.

This hike descends Vincent Gulch to Mine Gulch campsite, then further down East Fork

Last Wednesday I journeyed back down Vincent Gulch to the stream side shelf of Mine Gulch Camp.  Nothing’s at Mine Gulch any more in the way of improvements such as tables, fire pits or outhouses.  However, the broad bench alongside the stream bed is shady  and very level, offering a great camping spot at a place where you can explore the Prairie Fork by going straight across the wide, bouldery wash or heading down the East Fork toward Alder Gulch, Fish Fork and points further on.  My goal was to continue down the East Fork of the San Gabriel River to a spot near the confluence of Alder Gulch and then double back, hopefully returning back up to Vincent Gap before I lost my light. 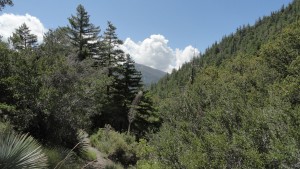 Heading down the trail in Vincent Gulch toward Mine Gulch campsite.

Really, once you starting heading downstream from Mine Gulch campsite, the East Fork stream bed is one big rocky floodplain for the next thirteen or fourteen miles to road’s end  near Follow’s Camp.  It is slow going and the stream crossings are numerous.  Bring a pair of water shoes with you, so you can just slog across the East Fork without having to make an endless number of risky jumps just to keep your boots dry. 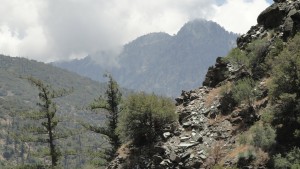 Iron Mountain as seen from the East Fork of the San Gabriel River, just downstream from Mine Gulch campsite.

Part of the character of these upper reaches of the East Fork is the isolation from other hikers.  I was out for nine hours and only saw one person, and that one person was within a hundred yards of the trailhead at Vincent Gulch.  That was it!  Much of the terrain passes through a myriad of beautifully striped metamorphic boulders, piles of fractured rocks that have fallen hundreds of feet from towering cliffs that border the deep canyon.  You must pick your stream crossings amongst wide glades of buckwheat, Yerba Santa and mountain mahogany peppered with sunbaked driftwood from times and storms gone past. 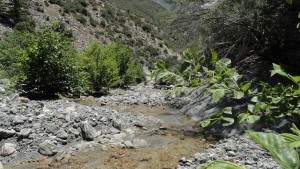 Looking downstream, near the confluence of Mine Gulch and the main canyon of the East Fork of the San Gabriel River.

Gentle, onshore breezes pushed up canyon as I continued heading downstream.  Occasionally,  beautifully twisting sycamores graced my way, sheltering me from the relentless June sunshine.  Their leaves quaked gently back and forth in the fresh air.  The interplay of shadow and bright pools of warm light constantly and quietly changed the mood around every bend in the canyon.  Surprisingly, the stream was flowing much more abundantly than I had expected.  Narrow hedgerows of white alder grew tightly along most of the stream course, adding their shade across secret pools of green. 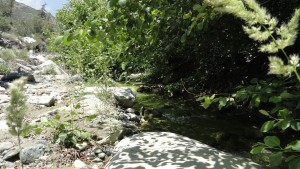 A tranquil setting of white alders alongside the East Fork of the San Gabriel River. Near confluence of Alder Gulch.

After finally turning around for the long ascent back to the car, I had fun looking for stacked rock cairns, “ducks”,  that had been placed by earlier hikers to mark where they thought the route should be amongst the wide, wide sunbaked washes.   It was a tiring, yet exhilerating day in the wild and quiet Sheep Mountain Wilderness.  If you want to get re-charged with the peace and quiet of the open spaces of our mountains, this just might be the place to consider. 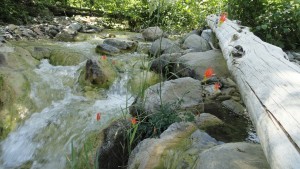 This clump of columbine has found its’ niche in the center of the stream bed. 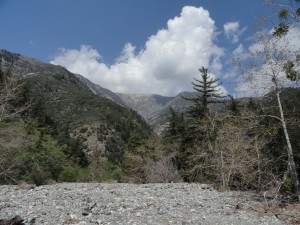 Viewing Mt. Baden-Powell from confluence of Mine Gulch, Vincent Gulch and the Prairie Fork.

Just last week, on Earth Day, I hiked down the Mine Gulch Trail from the Vincent Gap trailhead.

Common wall flowers alongside the upper Mine Gulch trail.

My goal was to reach dilapidated Cabin Flat Campground, up in the Prairie Fork.  This would be an 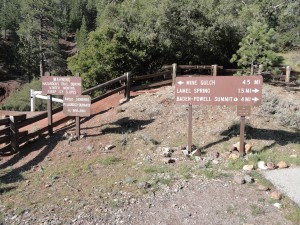 Vincent Gap Trailhead. The approach to Big Horn mine, Mine Gulch and the greater East Fork of the San Gabriel River is past the white fire road gate to the left of the split rail fence.

“out and back” day hike, with the hope of returning back before dark.  Vincent Gap is a great jumping off place for everything from the Manzanita Trail down the desert side of the range, Mt. Baden-Powell’s summit, exploring the Big Horn mine or, in my case dropping into the East Fork of the San Gabriel River.  The day was still and the air crisp.  The small leaves of the ceanothus (buck brush) were tipped with the silver pearls of water droplets from the previous night’s light rain.  Looking up, only the tiniest puffs of cumulus clouds peeked out from behind Pine Mountain to the east.  Perfect. 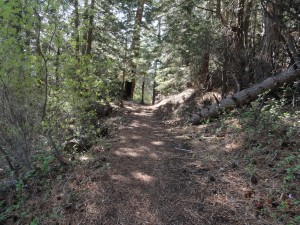 Contouring the red dirt mountainside, I followed the old Big Horn mine road to a point where the single track Vincent Gulch trail begins its’ descent.  A short ways further, the trail enters a sylvan green sanctuary of mature incense cedars and pines.  Steadily the trail descended into healthy stands of oak woodland while manzanita began to make its’ presence.  The ends of switchbacks afforded views into the expansive rocky run-outs coming off the northeast slopes of Mt. Baden-Powell.  Vincent Gulch’s steep, brushy tributaries continued to merge under canopies of canyon live oak.  Within a couple of miles, the murmur of a small stream could be made out before arriving at the bright spring greens of a healthy riparian environment of white alders and big leaf canyon maples.  The shaded stream is bounded by a steep and fractured geology. 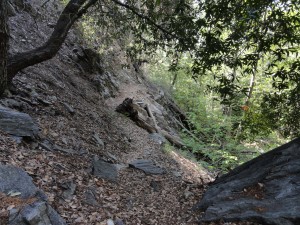 A section of the Vincent Gulch trail travels under the shade of bays, alders and Big Cone Spruce.

Dark banded metamorphic rock twisted and turned, leaving the stream and trail no choice but to follow.  So, on I went through groves of laurel bay and Big Cone Spruce.  Eventually the trail gave out to a wide, barren wash of bright rocks of all size and shape.  Bright, bright sun was everywhere.  The clouds had eclipsed a bit more of the deep blue sky near both Mt. Baden-Powell’s summit and Pine Mountain as well.

A leveled-out campsite at Mine Gulch campground. There have been no improvements here for decades.

Just before approaching Mine Gulch Campground, you’ll find the wreck of a small private plane that went down many years ago.  By now I was thirsty and was half way through the water, but no problem, had thrown my water filter into the pack at the last minute.  However, had forgotten to bring a hat, and could already feel the sun beginning to burn the top of my head. 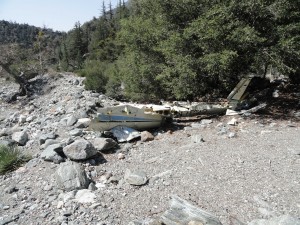 Wreckage of a light plane in lower Vincent Gulch. This fuselage and wing sections have been here for decades.

Was soon at the Mine Gulch Campground, about 4 1/2 miles in, essentially a shelf at the confluence of Mine Gulch, Vincent Gulch and the Prairie Fork.   Back in 1978, about the only improvement at this camp was an outhouse.  Now, even that was gone.   It appeared that folks still camped here, for some of the small flats looked recently swept clean from tents and tarps.  There were some abandoned camping supplies, buckets and even a fairly new looking pick axe.  Not all that surprising.  The East Fork still attracts amateur miners looking for that elusive gold.  However, no people were to be seen or heard.  Just the constant murmuring drone of the East Fork doing its’ river thing, grinding out the mountains over the eons. 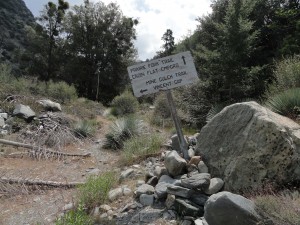 Trail sign at mouth of Prairie Fork. Located directly across wash from Mine Gulch campground.

Directly across the wide wash from the campground is a wooden sign telling me that Cabin Flat lays this way, not to mention the rest of the broad Prairie Fork.  Hopping from rock to rock, lizards flitted about the dry sycamore leaves.  The leaves and wash were paper dry in the way that September seems to conjure up.  It was only April…

Prairie Fork.  Just the name evokes images.  And, true to its’ name, there are places so wide that it almost beckons the name “valley.”  This is a very big drainage that has miles of timber stands, grassy meadow-like flats, chaparral and high ridge lines all around it.  Starting on up from its’ mouth, the ascent is easy, yet the trail’s about non-existent. 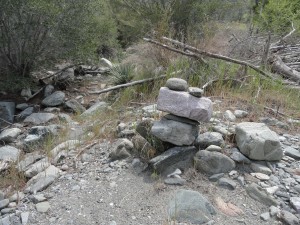 Rock cairn markers, known as “ducks” have been left by prior hikers alongside the Prairie Fork trail between Mine Gulch & Cabin Flat campgrounds. The trail is nearly non-existent in most places.

Periodically there’d be a rock cairn or “duck”, marking the way that previous travelers had taken.  Sometimes the placement of these markers made sense, and when they didn’t, it was time re-think my next move.  The area between Mine Gulch and Cabin Flat Camps is a little better than two miles in distance and really, pretty much cross-country hiking.  The lower part of the route is made up of glades of Yerba Santa interspersed with Yucca, blossoming buckbrush and the ever-present wide wash. 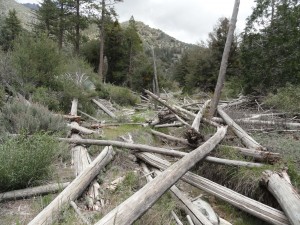 This section of the Prairie Fork trail is covered with downed trees that have been bleached by seasons of sun. There’s lots of stepping up and over downed trees, brush and boulders between Mine Gulch and Cabin Flat campgrounds.

Often, the pattern was following a remnant trace of trail or even the old jeep track, then coming to a turn in the canyon and being forced to cross the smallish stream.  Stream crossings in this part of the San Gabriels invariably means thrashing through thickets of young white alders.  Yet, that’s just what it is.  What really was amazing was just how very wide this canyon is.  Lots and lots of hidden terrain.  Occasionally, the canyon bottom would tighten up and so would the foliage, bringing on thoughts of fat, black rattlers just waiting under my feet…  I balanced and walked across dozens of fallen trees and the detritus of drift wood from storms in earlier times.   Just before approaching Cabin Flat, when the going seemed to be getting easy, there was a thicket of willows to pass through.  Then the young stinging nettles came into play.   Memories of having gotten stung by huge nettles back in ’78, meaning eight feet tall or more, came back sharply through the backs of my calves.  Quickly as I could, I jumped over a muddy expanse of more nettles and was free of the creek bed and climbed up the bank into an abandoned parking spur at my long awaited destination. 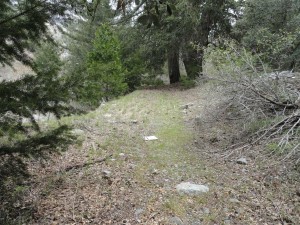 A small piece of the old jeep track in Prairie Fork that once went downstream to the East Fork of the San Gabriel River from Cabin Flat campground.

Completely still air and a sky that had become almost completely gray framed what was left of the old Cabin Flat Campground.   An occasional water drop made its’ way to me, yet it was the most refreshing sort of spring-like warmth mixed with the water.  The light drops seemed to wake up the scent of the sagebrush that had crept through most of the campsites that now sat idle.  Finding a few picnic tables under some shade trees, it was time to finish more of my lunch as drops turned to drizzle.  The sadness of the place had begun to soak 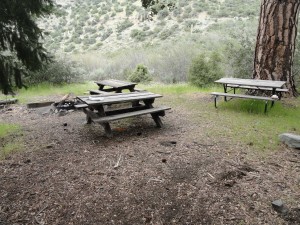 Cluster of tables and fire pit, which appear to be an actively used site at Cabin Flat campground.

into me, it was time to walk off the ’70’s.  The second liter of water was now gone and this thought kept surfacing…  maybe, just maybe, I could go on further to Lupine Campground, just a few miles on.  There might even be water at Columbine Spring.  And so I walked on, 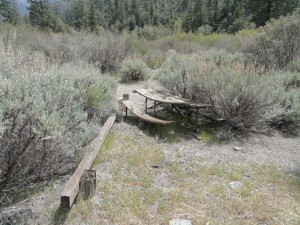 not heading back quite yet…