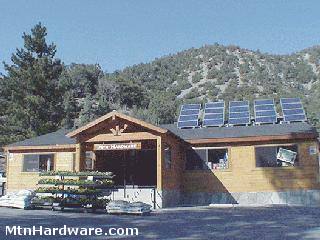 All of the energy we use ultimately comes from the sun. Firewood comes from trees that need sunlight and years to grow. Fossil fuels like coal, natural gas and oil are the remains of prehistoric plants or marine life formed by a process that takes millions of years to complete.

Mike Troeger, owner of Mountain Hardware in Wrightwood, isn’t going to wait for nature to take it’s course. Troeger has installed a generating system that produces electricity from sunlight

“This site is perfect,” said Troeger, speaking of his hardware store. “We’ve got a good southern exposure so we get plenty of sunlight. Its a shame to waste it.”

Solar panels must face south for maximum exposure to the sun. Trees or man-made strcutures that partially block the sun reduce the amount of sunlight falling on the panels and decrease the amount of electricity the    panels produce. Solar panels msut be installed where they recieve sunlight from dawn to dusk if they are to be effective. 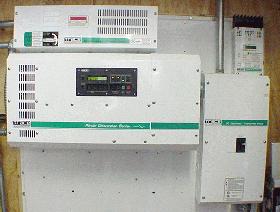 Even the best panels can’t produce a constant supply of electricity during the day. Production will be lowest in the early morning and late evening, which is exactly when the lights are needed. During the day, clouds passing between the sun and panels cause fluctuations. Batteries smooth out power fluctuations. A 48 volt array of golf cart batteries hooked in series stores electricity until it is needed. Light fixtures and computers need 115 volt AC current, but the batteries supply 48 volts of direct current. An inverter takes the current from the batteries and converts it to the alternating current required. The batteries are protected by thermal sensors connected to the control unit. The control unit shuts the system down if the batteries overheat and also prevents overcharging. The control unit can determine when the solar panels are producing more electricity than the store needs and send the excess to Edison.

“The building’s not completely wired yet, but once we’re tied into the grid, we can be a generator of electricity. We’ll sell electricity to Edison when we produce more than we use,” said Troeger.

Troeger said that a business like his was an ideal fit for solar power.

Troeger said that it will be ten years before the system recoups its cost in energy savings, and that systems like this aren’t for everybody. The primary requirement for a successful solar installation is exposure to the sun, which can be hard to come by in a mountain village like Wrightwood because of the many trees. Desert communities like Pinon Hills and Phelan don’t have this problem.

There’s no getting around the cost, though. Solar energy don’t come cheap.

“Solar isn’t practical for most homes,” said Troeger. “I couldn’t have done it without energy rebates.”

Saving a little money on his electricity bills is nice, but that isn’t why Troeger went solar.

“I’m doing my bit to make us a little more energy independant,” said Troeger. “This is a patriotic thing to do.”