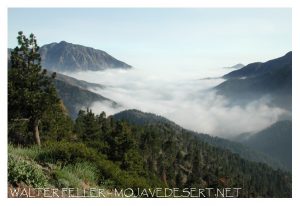 Before the Spanish built their missions, pueblos and ranchos there were the indigenous people of Shoshonean origin. To the south, across the ridge down in the foothills of the LA basin were the Gabrielinos. To the west in the canyons were the Fernandinos. Along the mountain tops and ridges and to the east were the Serrano. These nomads roamed a territory that spanned the San Bernardino Mountains and valley, and adjoining desert lands.

“Serrano,” meaning “mountaineer”, was the name the Spanish gave them. They called themselves “Yuharetum,” or “people of the pines.” They were a hearty people used to living in the higher altitudes. They maintained a self-sufficient and distinct lifestyle.

“From the day the Creator placed us on Mother Earth,
we have lived here in harmony with all living things and
the spirit world – our connection to the Great Mystery.” 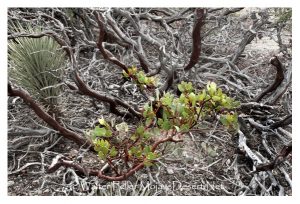 With the San Gabriel and San Bernardino mountains being central to their lives, they were adept at living off the land. They hunted game such as deer and rabbit. For food they gathered pine nuts and acorns. Manzanita berries made cider. Yucca blossoms and stalks were baked and roasted. Through several hundred years of gathering and trading they developed trails criss-crossing the ranges and ridges. 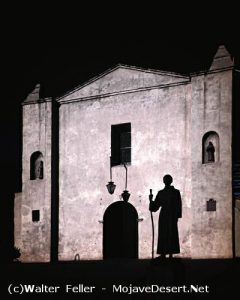 The Spanish in conquering California subjugated these people and took them to the Mission Asistentia in San Bernardino (1819). They taught them in regularly conducted classes in mission schools, but also to the more challenging standards of a European education as one may have found in the seminaries and schools of Spain. In teaching them Spanish and communication skills they were found to be intelligent and reasonable. The Padres in return, benefited from the Serrano knowledge of survival in an unsettled land.

Spain relinquished California to newly independent Mexico, and in 1834, the state secularized all church lands. The Mission was ultimately abandoned. When the sons of Don Antonio Lugo came to the area in 1839 to begin working the Rancho San Bernardino grant, all but a few of the Indians remained at the Asistentia. In 1862 and 1873, smallpox epidemics ravaged the Indian population and those few who survived found themselves with few options other than working for the ranchers who took up residence in the area.

The San Manuel Reservation was established in 1891. By this time, only a few hundred Serrano people remained. They were recognized as a sovereign nation, with the right to be governed by themselves. The reservation is named after Santos Manuel, a great tribal leader and is located in the foothills of the San Bernardino Mountains, just north of the city of Highland. It is 740 acres of mostly mountainous land. 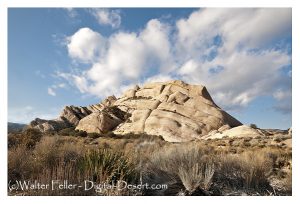 In 1849, Captain Jefferson Hunt, of the Mormon Battalion, led a group of settlers into San Bernardino. The Mormon Road stretched from Salt Lake across the Mojave Desert and down through the Cajon Pass. At the ridge along the summit of the pass they would dismantle their wagons, lower them to the valley floor, reassemble them and make camp at the formations known as the Mormon Rocks.

In 1851 the Mormon Colony purchased the Rancho from the Lugos. Two of these Mormons, Nathan and Truman Swarthout, homesteaded in Lone Pine Canyon. Eventually they extended their holdings to include the valley that now bears their name. The Swarthouts abandoned their holdings when the Mormons returned to Salt Lake City in 1857. 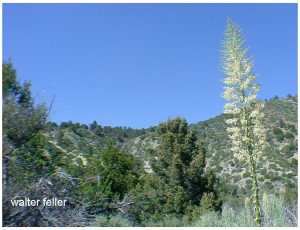 Almon Clyde filed a patent on the Lone Pine Canyon area in 1883 where he established a cattle ranch. The orchard that he developed adjacent to his ranch is still owned and operated by the Clyde family. Some of the original buildings can be seen from Lone Pine Canyon Road. It is said that at the top of this canyon is where the last grizzly bear in southern California was killed by Isaac Slover.

Charles “Tom” Vincent discovered the Bighorn Mine, the most spectacular of the San Gabriel mountain gold mines in 1895 on the precipitous eastern slope of Mt Baden-Powell. 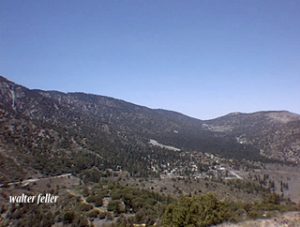 Between 1886 and 1926, the Swarthout Valley was homesteaded by many men, among them Harry Heath, Earl Schuyler, Sumner and Buford Wright. The Wrights eventually obtained two thirds of the valley, and it is, of course, from their name that Wrightwood got its name. They established the 1,000 head Circle Mountain Ranch at the eastern end of the valley, and an apple orchard the trees of which can still be found among the homes on the Mountain View and Apple Streets. A few of the buildings in the village area date back to the ranch days. This period also saw mining and lumbering come to the area. 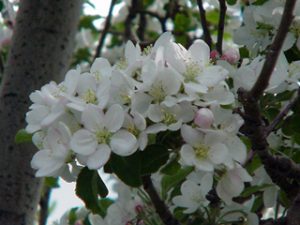 Sumner Wright came to the area in the late 1800’s. Originally from the Colton, California area, Mr. Wright acquired land in the area for the development of a cattle ranch. He operated his family ranch, Circle Mountain Cattle Company during the early 1900’s. He was responsible for planting many of the original apple trees in the area. The Wright’s apple production shipped apples from over 3,000 trees. The Wright’s also raised pedigreed cattle and trotting horses. 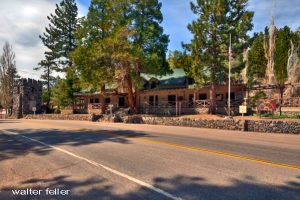 In 1923, Los Angeles county established a major recreational facility at Big Pines. Many of the buildings still stand (most notably one of the two stone towers that once supported a pedestrian overpass across Highway 2, west of Wrightwood). Now administered by the U.S. Forest Service, Big Pines continues to be a popular recreation area encompassing three ski resorts, several campgrounds and Jackson Lake. 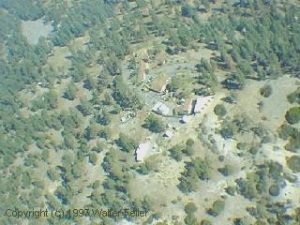 In 1926, the Smithsonian Institute opened a facility on Table Mountain to conduct solar research. Thirty-five years latter the Jet Propulsion Lab opened the facility under contract by N.A.S.A. 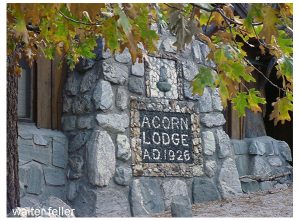 The mountain resort developed as a result of a down swing in the cattle industry. The family began to sell off parcels as a small subdivision for summer resort residences. The Acorn Lodge was built in 1926 by William Bristol. Bristol was himself a pioneer rancher, inventor, poet and a builder. The lodge was built entirely of materials native to the area. 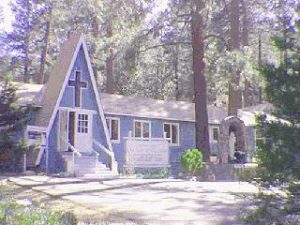 The church building for Our Lady of the Snows Catholic Church was originally the bunkhouse for the Wright ranch hands. It later served as an community meeting hall and school house. The original cookhouse still stands as do many of the small cabins in the area were also part of the original homestead.

By the 1940’s much of the Wrightwood area was owned by the bank. The interest in the land was picked up by two local investors, Lloyd Nix and Cleggs. Cleggs eventually sold his interest in the “Wrightwood Company,” to Nix, but the company continued to sell vacation sites. 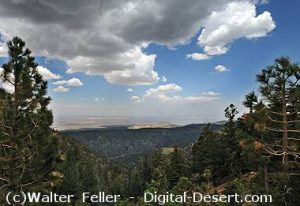 The National Forest Scenic Byway starts just east of Wrightwood. It winds westward through the Angeles National Forest for 52 breathtaking miles terminating in La Canada. About a two hour trip, sprawling views of the high desert and the Los Angeles basin command extra time to stop and appreciate.

In the beginning known at first as the Mountaineer, the first edition was printed on August 27, 1961 and had only four pages. The subscription cost $5.00 a year and the news stand price was a mere dime. David and Lora Gogerty were the first subscribers and three businesses, The Mountain Top Cafe, Wrightwood Lumber and the Blue Ridge Inn began an advertising relationship. One of the first classified ads came from the publisher Tom Pinard offering to trade a mention in the paper for a fresh apple pie.

In 1961 you could buy a fully furnished three-bedroom house in Wrightwood for $12,850. A ten-pound bag of charcoal cost 79 cents. The Holiday Hill (Mountain High Ski Resort) lift tickets were $1.50 for adults and 85 cents for children. The first edition cover feature was on the trees dying and the annual barbecue at the Lady of the Snow Catholic Church. That same year, Wrightwood received its first cable television service. The signal was cabled into the village from an antenna on top of Holiday Hill. There were no satellites then.

In 1962, Wrightwood and Phelan were granted permission to include kindergarten classes at their respective schools and the Yodeler in Wrightwood opened its doors. In that same year the Jet Propulsion Laboratory built its first telescope on Table Mountain and in the election for governor, former vice president Richard Nixon beat Edmund G. Brown 147-121, among Wrightwood voters. Brown won statewide.

The first Lions Directory appeared in 1963 and Holiday Hill began snow making for the first time.

In 1967, Wrightwood would receive natural gas from the Southern California Gas Company. Phelan School would complete the multipurpose room as a cost of $158,000. 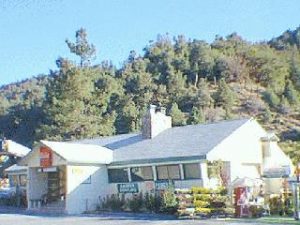 Mountain Hardware opened in Wrightwood in 1968 and Robert Hedden became fire chief in the mountain village.

1970 the Interstate 15 was completed from the Devore to the Cajon Pass, making travel from the Tri-Community to San Bernardino easier. Those first ten years the Tri-Community was very small. A very close knit community that was pretty self-sufficient.

By the time the 70’s rolled in Tom Pinard had made the Mountaineer a fixture in the Tri-Community. The area saw the establishment of the Tri-Community Art Association, the Friends of the Forest got together and they came up with the San Gabriel Mountain Interpretive Association. The folks looking for culture came up with the Wrightwood Area Cultural Organization (WACO) and Pinard came up with “High in the San Gabriel Mountains_ Visit Wrightwood“.

In 1973 the highway was open to Crystal Lake, linking San Gabriel with Wrightwood. It had been closed since 1969 when 41 inches of precipitation played havoc with the highway forcing its closure. 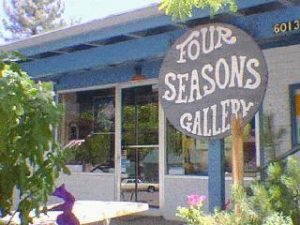 In 1974 Pinard built a railroad station in the village. He used to sit out in front every weekend, drinking beer or wine and catering to the “tourist”. As the high school plan got rolling and construction actually started, friends convinced Pinard to run for school board and he won. The Four Seasons Gallery opened in 1974 in Wrightwood.

Holiday Hill had a fire in the chalet in 1979. It was determined the fire was caused by arson. By the mid 1979 the Mountaineer reformatted the paper from a tab size to a full 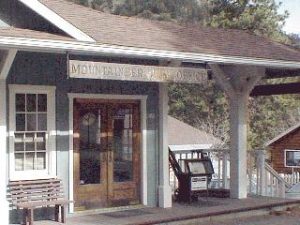 As the 70’s rolled out the Mountaineer was growing side-by-side with the Tri-Community. Wrightwood wasn’t changing much, life on the whole, was pretty good.