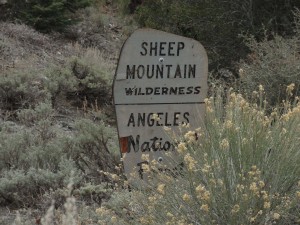 A weathered Forest Service boundary sign denotes the edge of the Sheep Mountain Wilderness in the Prairie Fork up canyon from Lupine Campground. Both Lupine and Cabin Flat Campgrounds are just outside the boundary.

Once I left Cabin Flat’s abandoned remains, the road steadily and steeply made its’ way up the Prairie Fork.  A Dwight Twiley song, “I’m On Fire” (circa 1975), kept running through my head as my route passed through thick groves of buckbrush and sage intermingled with groves of statuesque Jeffrey and Ponderosa pines.  Nature had made good on her promise to take back what people had not maintained.  The road is designated as 3N39 and is wide enough to drive on for short distances, only to be reduced to single track and even completely missing at a couple of 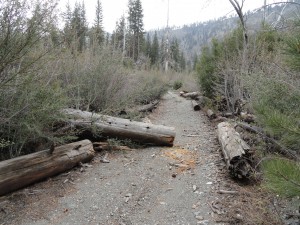 stream bed crossings.  The Prairie Fork is in many ways a wide flood plain throughout her length.  Left and right and left, again,  the channel meanders where it will and so do my thoughts.  The metamorphic boulders’ grays seemed ever grayer under the flat steel gray skies on my upward trek.  Yet, there was a brightness that came flooding in every so often throughout the quiet alpine day.  The air continued to be still and fresh.  Small bird calls and the crunching of my boots on dry twigs and sand punctuated the quiet scenery.  Several miles up from Cabin Flat I encountered the sylvan, forested bench of Lupine Campground.  The elevation between the two camps is about 1,200′, yet enough to produce a noticeable change away from the oak-woodland environment into a mature coniferous forest. 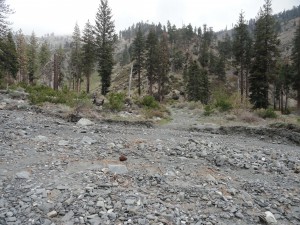 A washed out streamed crossing just down canyon from Lupine Campground in the Prairie Fork.

True to its’ name, the resilient purple and lavender blooms of lupine abound in this forest setting.  As with Cabin Flat, there were no people here at Lupine Campground, either.   The tables here are the “old style” large dimensional type built by the Forest Service back in the day.  Liking them so much, I once copy-catted this design, including the hefty 3″x12″ planks, and built some at Sturtevant Camp in the Big Santa Anita Canyon.   There’s the sense of being in a bit of a time capsule in places like this.  Over and over, I saw the rock work which used to support the flat plate Klamath style wood burning stoves that each campsite once had. It was amazing how “at home” I felt here in this old hidden camp.  One issue, however, kept knocking at the back of my throat…  My water was nearly out and the Prairie Fork had been reduced to a dry wash not far above Cabin Flat.  If only Columbine 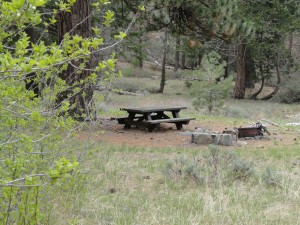 A peaceful campsite as scene here at Lupine Campground in the Prairie Fork. Located at 6,500′ elevation, this forested destination is replete with 12 campsites and nearby Columbine Spring. It is also the ‘jumping-off’ point for hikes into the Fish Fork. Take forest service road 3N39 to access this site.

Spring was running…  Time to check it out.

The scuffing of my boots through the sagebrush woke up the sleepy scent and my thoughts would be filled with more mountain places.  Up the little canyon behind the camp I followed the broken pipes of the derelict water system.  Climbing the upslope wall of the concrete water tank, I peered down into the opening in the roof.  It was dry and filled with rocks.  So, onward and upward I went, passing squaw currant and more sage.  Eventually meeting up with the Fish Fork Trail, the little canyon 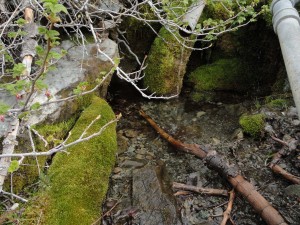 Columbine Spring above Lupine Campground in the Prairie Fork. Accessing this water made all the difference in getting back home to Wrightwood. Note the pipe sections from the abandoned water system that once served Lupine Campground. This spot can be accessed by walking up the Fish Fork Trail just up canyon from the camp.

produced the sweetest little sound of trickling water over rocks and mosses.  Setting up to filter some of this mountain spring water, a pair of hummingbirds buzzed my red anorak jacket and then went about their work of gently prodding what nectar they could get from the still developing blooms of the currant.  They seemed to keep a wary eye on this lone traveler as the three of us took what we could from the oasis.

Happily rehydrated, it was time to get a move-on up and out of the Prairie Fork to Guffy Campground.  Munching on almonds and a little apple, I encountered a third washout on the road dropping down from Blue Ridge.  High clouds were swarming past Pine Mountain, now looming high up to the southeast.  Occasional spits of rain had now turned to sleet and hail.  Putting on my rain gear under a cluster of oaks alongside the switchbacking road, the chill was now beginning to soak in.  The only thing to do was hike faster, and, of course, I was soon sweating under the rain top.  Sunshine

came streaming in as the pelting of hail resonated under my hood.  Puddles had formed and red 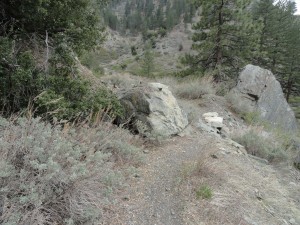 The Fish Fork Trail near its’ trailhead at Lupine Campground. This section of trail was originally a narrow road that one could drive on to West Pine Mountain Ridge. I drove this road back in the early 1980’s. Today it is all single track, non-motorized trail.

bouquets of Indian Paintbrush speckled the glistening slopes of rock, pine and sage.  A thick blanket of clouds had now pushed up so high, Pine Mountain’s (9,648′ elevation)  plate-like slide was completely hidden from view.  As soon as I reached the top of the road, the moisture was over, replaced with a frigid breeze.

Guffy Campground, like its’ neighboring camps, was devoid of people.  Although chilly, a warm light permeated the late day scene.  Dropping down to the north side of the campground to find the spring just barely flowing, really more of a drip, at this point in the year, filled me with fiery summertime woes. 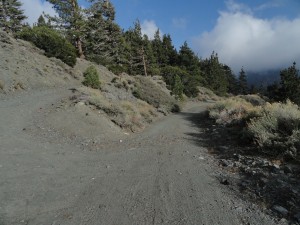 Heading east on the Pacific Crest Trail, the gold light illuminated the ancient “flag” trees growing out of Blue Ridge’s gentle and meandering rocky trace.   A yellowed little poem from the Mountaineer Progress Newspaper, that lays on my desk, came to mind.  There is no author attached to this little beauty, except the words: “Thanks Blue Ridge, Holiday Hill and Table Mountain.”

Where is the magic?

Slopes no prints have crossed

What is the magic?

About a mountain mantled with fires.

Arms reaching to the heavens while we traverse snowy paths.

Can there be magic?

Assuring the restoration of my soul.

Once, down the Acorn Trail a few hundred feet, the temps seemed to have bumped up a good 15 to 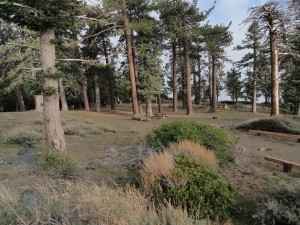 Late afternoon view of Guffy Campground. At 8,300′ elevation, this is the highest “drive-in” camp in the Angeles National Forest.

20 degrees.  Finally.  Dusk was rapidly falling on the north side of Blue Ridge as the trail made its’ rapid descent of 1,500′ down into Acorn Canyon.  The Swarthout Valley cradled Wrightwood, far below, in a story book dream.  The yawning had begun. Too lazy to walk the entire distance home, I called my wife from the mountainside to see if I could get a short ride home from the trailhead.  Just before Joanie met up with me, the walk past large homes, lit from within, was almost over whelminging reminiscent of how a 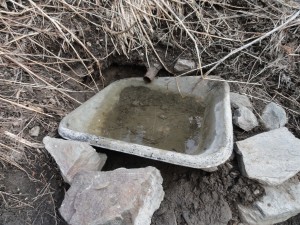 The situation looks bleak at the little spring situated downslope and north of Guffy Campground. This spot can be accessed by walking steeply down a north-facing path that drops into a draw below the campground. The old pump house is your landmark.

lone traveler sees everything from the outside.  Truly separated from another’s hearth fire.  For a few moments the wildness of the day seemed to not know how to marry with the world of seemingly big, quiet houses and pavement.  When 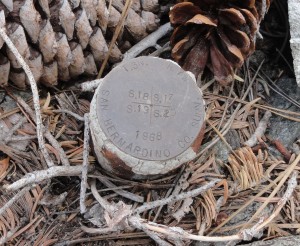 A range and township benchmark located alongside the Acorn Trail, just below the Pacific Crest Trail. This “monument” shows that you are at the point where sections 17,18, 19 and 20’s four corners come together south of Wrightwood, CA. This spot is marked on the Mt. San Antonio 7.5′ topographic quadrangle offering the map reader a “sense of place.”

the little car pulled up to greet me, the scent of home-made lasagna wafted up from her hair and clothes.  Ever better, comfort of home had arrived to me.  I was back home as a traveler from the near, yet distant lands of our mountains.